This post continues with the history of the Palladium Building/Club Plantation, and reveals the ownership and managers behind the famous St Louis nightclub. Like the stories and musicians in the book, Devil At The Confluence, this information has never been published before. Currently, the Palladium building may be sold and demolished like so many other lost historic landmarks, so this series of stories are being gathered and posted as quickly as possible so the important history of this legendary nightspot is available while the structure still stands. The inadequate historical record and disinterest for preservation of cultural landmarks by the alderman and governance of the city of St Louis does not reflect the pride that the citizens have of their city. But there is a new attitude of appreciation and preservation in the citizenry and it outnumbers the old. Even though the current office holders do not reflect that yet.

Al Capone may be one of America’s most well-known gangsters and a symbol of lawlessness in Chicago, yet his crimes are proudly exhibited in Chicago’s History Museum. There is no museum in St. Louis for the prohibition era gangsters of the city. While that may be due to, well let’s just say, an overly-sensitive inhibition concerning all facets of its history, the true fact why the Mob bosses in the Lou aren’t well known is a testament to how much better they were than Capone. After all, surely the main job of a good Mob boss is to keep everyone in the city from knowing you’re the Mob boss.

The St. Louis gangster, Tony Scarpelli owned the Club Plantation. The club operated as a set-ups nightclub, meaning they sold food and provided ice, soft drinks, and glasses and the customers brought their own liquor. This way they could stay open later than the 1 o’clock curfew for taverns. A liquor law work-around.

St. Louis has a long-held distaste for liquor laws. First, because beer and wine are a part of the traditions and culture for the St. Louis German, Irish and Italian immigrants, and second, because of the great brewing industry that employed many of the citizens. There’s also a long tradition of organized crime in St. Louis as well, including mobsters Dinty Colbeck and Buster Wortman, whose careers were also principally, well let’s just say, in the liquor and spirits trade. So St Louis had Jazz Age prohibition entertainment and nightlife as vibrant as Chicago, Los Angeles or Las Vegas, and they also had the same kind of prohibition trouble. 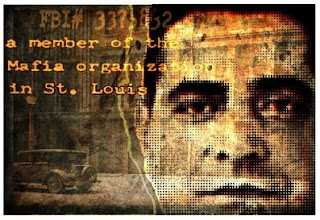 But the Club Plantation’s Tony Scarpelli was, it appears, nothing more than a minor hood with only minor liquor law violations on his record. But dig a bit deeper and you might find that his rap sheet included armed robbery and a file with the FBI. Most of the people in the city probably didn’t know about that. Sure, there was talk around but that was just rumor. Now Tony’s younger brother Jimmy’s rap sheet included bootlegging, robbery, gambling and a murder charge, so his involvement with the nightclub was kept on the QT. There was a lot about the Club Plantation that was on the QT. So maybe Tony was just good at, well let’s just say, keeping his nose clean.

Kevin Belford is author of Devil at the Confluence, a book about St. Louis’ pre-war blues music. Contact him at kevinbelford@gmail.com.

2 replies on “Tony Scarpelli and the Club Plantation”

[…] Plantation sold food but not liquor since it was Prohibition.It offered setups of ice, sodas and glasses for patrons who brought their own alcohol. It closed in 1947, the same […]

[…] at the Palladium, built in 1913 as a roller rink but most significant as a ball room later known as Club Plantation. While the Castle Ballroom is now on the path to finding a good owner and new life, the Palladium […]