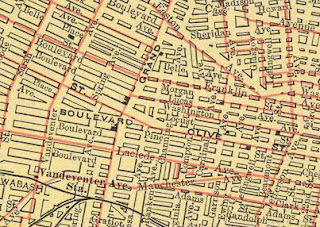 This United Railways streetcar line map from 1903 reminds us of what is possible with mass transit. The red lines mark streetcar lines, which augment the street grid with a separate network of traffic. In 1903, that separate network was primary to many people. The streets where the street car lines ran gave rise to commerce and pedestrian traffic. The streets around them saw secondary benefits.

Now, 107 years later, county residents are faced with a choice on whether to approve Proposition A to fund the region’s public transit system, now doing business as Metro. That the funding comes through a sales tax increase that triggers an already-approved sales-tax increase in the city has generated concern. A sales tax increase is not desirable, but neither is the funneling of tax revenues to a state infrastructure agency, the Missouri Department of Transportation, that exclusively fund roadway construction. The money raised for state highways ought to stay in the region to begin with, to fund the transportation that best serves an urban area — just as Chillicothe’s transportation dollars are probably best spent on roads. If the money must go to the state, then it should return in the form of funding for mass transit operations in addition to highway funding. There is a board political goal from which our leaders cannot shirk after tomorrow, no matter what outcome.

Back to the 1903 map: density of transit lines created and sustained commercial districts at the turn of the last century. The map here shows midtown St. Louis, which soon afterward would be dubbed the “second downtown.” This is entirely due to the placement and density of mass transit street car lines. Today, we don’t have such stark benefit but we have a regional core where bus and MetroLink service is sufficient to support the location of major employment.

In 1903, mass transit made Midtown more desirable than other parts of the city of St. Louis. Today, mass transit makes the core more desirable for major employers than exurban locations. County voters are not voting to build up the city, but to sustain their own place in the regional economy — a place staked by relative density of population and transit lines. Without the sustaining the Metro system, what gives a county municipality like Brentwood a distinct business advantage over St. Peters? Or, for that matter, Chesterfield over Wentzville?

When we lost the street car lines, we found out what would happen when Midtown had to compete with the county in the absence of a strong mass transit system. Midtown faded away. So it could go with St. Louis County. Whether the city or St. Charles County ultimately benefits from the decline of Metro is a gamble of unknown odds. Somehow I doubt that defeat of funding for mass transit will benefit the urbanization of an already too-dispersed region. Yes, if Proposition A fails, the system is not dead — but it will shrink immediately and the prospect of service restoration will diminish. Passage of Proposition A allows time to build a better funding system without regional havoc or further economic dispersal.

3 replies on “Proposition A”

Anytime I travel I always marvel at the shear daftness of STL city/county in regards to transit.

In the USA too there are much smaller cities that seems to have realized the importance of rail transport (such as Portland).

Has there been any interest (besides Edwards and Mckee) of installing streetcars (ala Portland, Salt Lake city)?

This is a really interesting site, parallel's Cathryn Swan's http://WashingtonSquarePark.wordpress.com in New York.

Where you be at? Been trying to reach you!